The Catch & Release (C&R) ponds in Jugra very rarely lure us over. Knowing that a satisfactory trip with good eating fish sums up a productive day within an hour at the RM3 pond is just steps away, it is tough to embrace the C&R pond where fishes bite only if you’re lucky. However, a variety of fake baits provide a different set of challenge that pushes the angler to upgrade his skill along with the constantly changing habits of the marine world.

A trip to Jugra, fishing alongside our friends Tessy and Victor had us armed with a variety of Berkley grubs to attempt the C&R pond once again as we fight the devilish whispers in our heads, telling us a live prawn meant a fish in 15 minutes maximum on the other side. Hush! In Berkley grubs we trust.

Our delayed arrival saw Tessy and Victor hard at work, cast, reel, repeat- hunting for Groupers. We were greeted by the pond’s caretaker, whom we share a good relationship with over the years of fishing in Jugra. He had with him, some very good news. As fishes become shy of lures (or terrified, stressed, smart) having been tricked to bite, only to be released time and again without a meal, anglers would normally have to wait much longer before the fishes decide to bite again. Therefore, fishes that are accustomed to the trickery of the anglers lure tend to pay no attention to the variety that we cast and retrieve so strenuously. The good news was, a brand new Barramundi pond was available to fish in. He said in Malay and we quote in English “cast it in, and they will DEFINITELY bite”. What you don’t know, won’t hurt you, right?

Could this be the trip that lures us further to try the C&R pond of Jugra in the future? Only one way to find out.

Very quickly, our adrenaline was sent on a roller coaster ride. He was right, cast and they did bite… But they’re spitting out the hooks just as fast. Victor and Tessy got lucky a couple of times landing the juvenile Barramundi however no luck for Naweshad and I despite the occasional quick fights. We changed grubs of various colours and continued on with varying retrieve rates, Naweshad finally managed to land a Barramundi with a grub colour recommended by Tessy & Victor.

We decided to switch ponds, I tried for Grouper as Naweshad went ahead for his favourite, the Red Drum, which has been said to be too shy for far too long.  Tessy landed a few beautiful Groupers on Berkley grubs of bright green and yellow in colours. I missed two Groupers and was grumbling as I had to switch areas whilst the population of anglers decided to invade my spot. Naweshad managed to hook onto a Red Drum, a decent fight unfortunately that too spat the hook out.

Tessy was kind to point out a spot in the pond that I then attempted. Having proven her prowess of the C&R Groupers in Jugra, I needed to rely on her knowledge to be able to land my very first fish in these ponds. “Go slow”, she said. Rumour has it, your slowest at times may not be slow enough. As my mind began to ponder on the idea that I was not made to fish with grubs, a fly buzzed across my face. I stopped my retrieve to render a quick scratch to the tip of my nose when a tug on my rod almost sent it for a swim. I reacted according, with mild panic and excitement, adrenaline going haywire across my system…I knew what that meant. Strike and scream goes the reel! Nothing too fancy, Groupers being a lazy species, there was much more dragging it up then there was any attempt of it running away. Finally, on a beautiful Berkley pink glow T-Tail minnow, I landed a feisty Grouper, and released it safely. 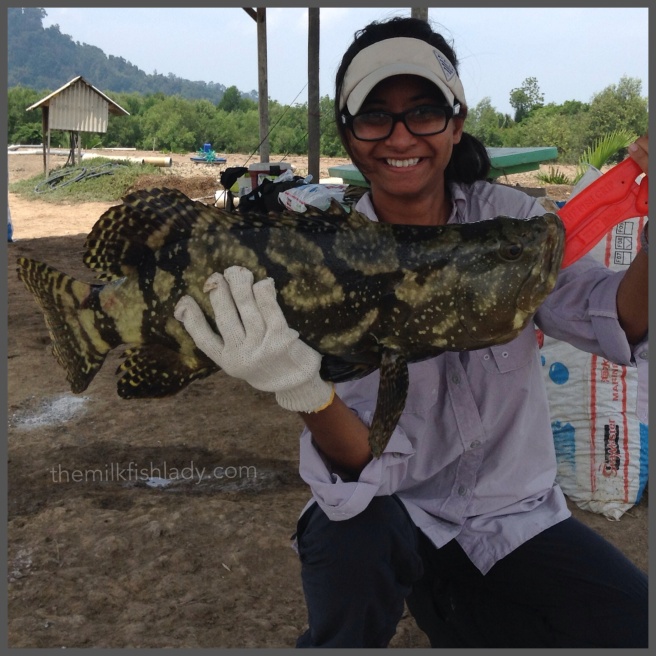 Whilst we were busy attempting Red Drum and Grouper, Victor was seemingly very busy at the Barramundi pond. Every moment we glanced over, he was either on to a fish or releasing one. We decided to join in the fun. Victor was on a roll catching Barramundi on Poppers, something we have yet to attempt that he highly recommended.

What unfolded after was a rebirth of the child within us all, glee and excitement filled the air. Once a popper hits the water, a splash is followed by acrobatic flips of the juvenile Barramundi sending us roaring with adrenaline- if we lost a popper to the battle, we attempted with another, we shared, but we never stopped. With minutes left to the session, countless Barramundi was caught and released by the power of the popper. You cannot imagine how such a tiny fish on popper could provide so much satisfaction to the sport, so much happiness and fun. We did not want it to end.

It has been awhile that we enjoyed great company fishing alongside an amazing session. We cannot assure that the Barramundi are still popper crazy after the damage that would have been done since then, however if you ever find yourself at the opportune moment of a brand new fish release in the C&R pond, gear up, pull out all the stops, let your hair down and indulge in what could be an addition to one of your simplest yet best days fishing in Jugra.

Enjoy the photos and video of our trip below!

Published by The Milkfish Lady