It wouldn’t have done justice to the angler had I wrote an entry to speak of my personal experience at the event alongside his magnificence thus I have decided that every disappointment faced on that day, which was quite a few, was to be on my Fish O’pinion post. Now here we are.

We got our “passes” from the Astro circle website. There were two options to redeem ; one is an exclusive dinner with Jeremy Wade and the other, a pair of VIP passes to meet Jeremy Wade.

At this point, my husband and I were confused… which one shall we pick? Dinner? VIP Passes? Both! The Astro points were sufficient however passes for an exclusive dinner has run out so we ended up with 2 VIP passes only. Did it sound that bad? Hell no! It’s VIP passes! Do you know what VIP means?

We waited for our VIP passes to arrive, it never did. Instead, we got a call confirming our redemption, followed by a text message and through those we were told to collect our passes on the day itself at the registration counter.

Wow! We are about to meet Jeremy Wade, and there you have it, some VIP treatment, a call, confirmation, and some very cool passes waiting for us.

Or so we thought.

We arrived early at Sunway Pyramid, part excitement, part time management so we could have breakfast before the show. In a circular area known as the Blue Concourse within the mall stood a stage with elaborate decor befitting the River Monsters theme, it sent chills through our body, the good kind, of anticipation knowing very soon, we are about to come up close and personal with Jeremy Wade. We saw chairs arranged within an area in front of the stage, more than 30 chairs. Wow! We will be seated on one of those whilst the rest of the mall stands around to watch him Live. VIP alright!

Having been a “VIP” at a few events before this, and knowing what VIP passes look like, I was looking forward to see how elaborate the design of this pass would look like. Upon registration, we got one goodie bag. One bag for the two of us. Which we paid no attention to because we are not here for the bag. The lady behind the counter passed us two blue coloured wrist band, the paper kind.

“You will need this to enter”, she said.

I could put those words together to understand that those paper wrist bands were our VIP passes.

We took a few photos and headed out for breakfast. Halfway through, we realized the goody bag we were hanging on to. Looking inside, it wasn’t anything special but alright, we got a goody bag; note book, pen, nice souvenir. Maybe Jeremy could sign on one of these since we didn’t bring any merchandise for him to autograph on! Now THAT would make it useful!

We took a slow stroll back to the venue of the event and noticed very quickly more than half the chairs were gone. It’s just two rows of chairs now. I was wondering if everyone else could not make it.

We saw a gentleman seated and I told my husband we should take our seats too.
We took our paper wrist passes to the counter, they showed us in and… The lady pointed to an empty area behind the chairs.

“Do we sit anywhere we want?” I asked

To that she said, “No, the chairs are for the media, you can just stand within this area”, she pointed to the very same empty area behind the chair.

“We redeemed the VIP passes, do we still stand?”

I could tell she hesitated before answering, “Yes Miss, the passes allows you to stand closer to the stage, all around this area”

I looked my husband with eyes of angst and disbelief, him being the Ghandi between the two of us merely smiled, held my hands and led me to the “standing area”.

I was unhappy. Didn’t we redeem VIP passes? Maybe she didn’t hear me right. I shall speak to someone else.

I approached a personnel with the “Staff” pass to enquire and was directed to an Astro staff in-charge of the event. To her I asked the same questions, that we are to stand? When she confirmed that we did, my question was simple…

“So why did we use points to redeem VIP passes when we could have just stood outside the circle like the rest of the mall would!?”
They didn’t need to use any points, as a matter of fact, the second floor would have an unblocked view of Jeremy whilst we have to stand and “calmly” wrestle people around us of various heights, all cramped up like in a can of Blue Concourse Sunway Pyramid Sardines.

To that she said, “you get an exclusive goody bag!”

At this point I needed to muster enough patience and will power to contain myself from throwing the entire staff into the imaginary Amazon River of my mind. Filled with hungry Arapaima’s ready to have lunch.

We got one goody bag. ONE. For us as a pair. To that we saw pairs carrying one EACH. But it was such a pathetic goody bag we don’t even mind… Or want any more of it.

Therefore to her I replied, controlling my angst, finding my words… “It would be more productive if Jeremy Wade was in this bag”.

A kind Discovery Channel staff approached us and said, “Don’t worry, you will enjoy the show, he is really good!”

I know he is good. That’s why I redeemed a “VIP” pass to be here.

We walked away. Unfortunately, Astro and Discovery Channel event planners have just unleash the wrath of a very disappointed and upset fishing blogger, to top it all off, I’m a woman.

I took it upon myself to observe closely and photograph what I could to justify how ridiculous the planning of this event was. It was very easy to spot the flaws, especially when the expectation we had was shared with majority of the people present, who like us, got VIP passes.

One by one they stepped in, took a seat on the media chairs and were asked to leave and stand behind it instead.

What happened to those days when fans sit and media personnel crowd around to take photos. Aren’t they the ones with cameras that could capture your pores from a mile away?!

The show didn’t start on time. Which is expected. It also meant that we had to stand for much longer.

The “Media” finally came and filled only a few seats. What ticked me off even more was that they came down with autographed posters, personal photos with Jeremy Wade, an exclusive fishing chair, etc. Its understood that the media gets some perks here and there but why prioritize them when they ALREADY got their personal chance? 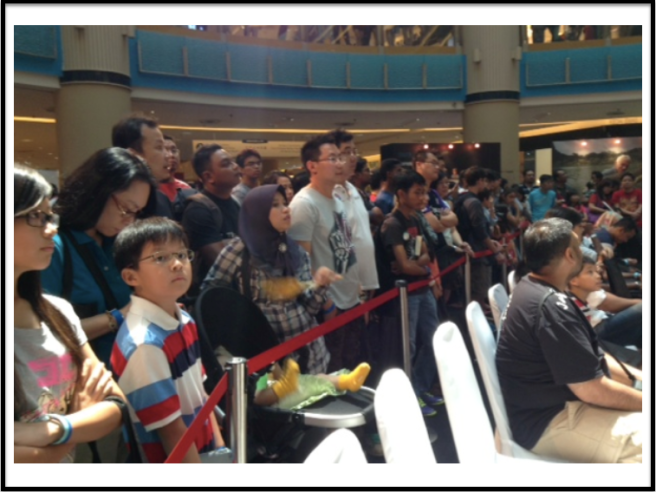 Some fans were picked out to fill up the empty seats.

The show began. Throughout this time, most of the media personnel was not bothered by Jeremy Wade, they were on their whatsapp group, even had their laptops on to edit photographs. Well deserving of the seats, definitely.

The host of the event, which I personally feel they could’ve picked someone better, kept saying, “don’t worry guys, everyone here (the can of Sardine VIP crowd) will get a chance to get up close with Jeremy Wade!”

After so much disappointment from the event organizers, I told my husband, if we don’t get to go up, shake his hands, and have him sign a personal momento, I’m bringing the house down.

To that he laughed. As he normally would.

The show ended. They opened up the stage for a session of photography, getting up close and personal with Jeremy Wade. Wait a min… Why isn’t the barrier between the Sardine Group and the media lifted for us to go in?

Oh! We are not entitled to a photo either, that’s why.

We basically redeemed a VIP pass for a goody bag. That’s why we went through all the trouble, that’s right, to get a goody bag. Jeremy Wade? Sorry? Who is that? Don’t know him! I came for the pathetic goody bag!

Jeremy Wade, his presence is phenomenal which is why I dedicated an entry to him only. What the event organizers failed to realise was that, he had some serious fans, who don’t just watch his shows but aspire to be a little like him. We have a friend who dreams to be Jeremy Wade and decided that he would start bringing a diary with him when he goes fishing.

The venue in Malaysia wasn’t well thought of. Malaysia, Kuala Lumpur has so many more beautiful places to have a show like this that could amplify the excitement and justify Jeremy’s work in River Monster. The ambience cannot be achieved in a mall!

On top of that, many anglers that share our same sentiments came by with their favourite rods, tackle box, fishing outfit, with hopes to get Jeremy to autograph on their beloved fishing gear. We saw people heading home disappointed.

I don’t know what it’s called anymore. But I sincerely hope people don’t give up on the show due to poor planning on the event management’s side.

I tried, one last time, to approach the staff in-charge from Discover Channel this time… My question to her was, “May I know what are the prerequisites of getting a photo with Jeremy Wade?” To that she answered, “you need to be affiliated”.

She said sorry and walked away.

So why on earth did Discovery Channel South East Asia open the show to the fans? Make them feel like they were up for something truly special, a chance to meet Jeremy Wade, VIP Passes, excitement, anticipation. Only to end up disappointed.

At the very last moment, a group of anglers pushed themselves through to the front for Jeremy to sign on their gear, a small crowd of maybe 10 people maximum, the event manager yelled at them, summoned for security and Jeremy’s body guard.

Bad enough they came with expectations that were trampled upon by Discover Channel’s event planners, now they are chased away for doing something they thought would’ve been a part of their experience anyway. It was at a time that the crowd had cleared and frankly, no damage would’ve been done if they were to excuse Jeremy in a more civilized manner.

All in all, it wasn’t about a photograph, an autograph or merely shaking Jeremy’s hands. It was about promoting something that wasn’t there to start out with. VIP passes to stand in a semi-circle formation around the stage uncomfortably is not VIP passes. Yes we saw him closer than the second floor of the mall did, but we were all standing for the duration of the show and more whilst having to wait. We were all trying to get a better view, pushing around people, lifting our devices in the air, having to sniff smelly armpits. How is that VIP?!

To top it all off, the poor planning of the event had to be compared to the finale in Singapore, which was spectacular. Great venue, great display, and I saw more people seated than standing, more media personnel? His entrance was well done too.

I truly wish I was back in Singapore to experience that. Nonetheless, remind me to never trust another VIP redemption by Discovery Channel S.E.A. in Malaysia, unless you’re a media personnel or affiliated, you can trust that the River Monsters event as a whole was cool to experience with Jeremy Wade, but the effort and expectation that went into it was a waste of time.

If you missed it, chin up, you didn’t miss very much.

For the love of Uni-Knots and honest advertising,
The Milkfish Lady

Published by The Milkfish Lady